Brisbane-based Digital Marketing & Conversion Specialist with a passion for all things digital.

Building a startup can be tough. On the surface, you need to; identify an existing problem, offer a valuable solution, validate the concept, and most importantly, generate revenue.

Now imagine streamlining this experience into a 54 hour period.

Throughout two and half days, over 120 individuals attended the Tech Stars Startup Weekend at River City Labs. What an experience it was. 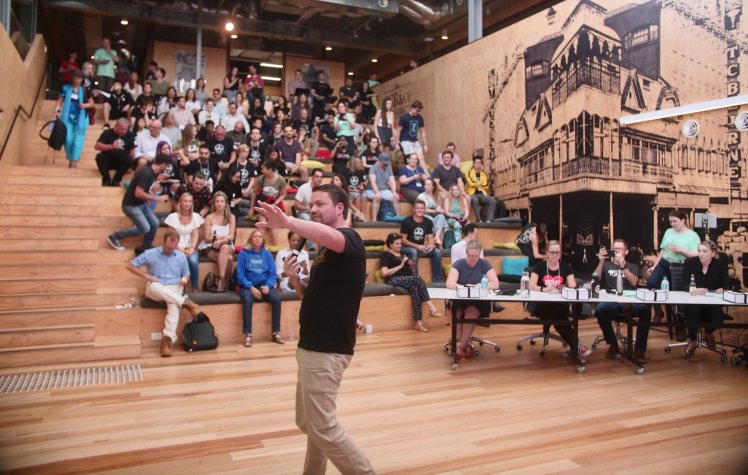 After pitching ideas on Friday night, building a product throughout Saturday, then completely pivoting that very concept the same night – my team and I were fortunate enough to place second overall.

The primary objective of Startup Weekend was to build a lean startup, offer value to customers, then generate a source of revenue. This would validate the demand for your venture.

To help accelerate the development of each team, we were all given access to mentors, a free .co domain, and even some impressive Google credits** (more on this later).

I’d partnered with a team lead by Steph Lahey which we later branded as Cloval. We aimed to solve a social problem that Steph had identified – there’s currently no one-stop platform for consumers to buy end-to-end socially conscious clothing from the worlds top brands.

With a background in digital marketing, I loved the idea of creating a marketplace. I knew we could use a platform like Shopify to quickly build an online store. As we’d be driving traffic to affiliate stores, we wouldn’t need to host our own stock, streamlining the whole development process.

We’d also planned to use the available Google credits to create an assortment of Google shopping ads.

In my eyes, our plan was flawless. Surely this strategy could at least generate $1 of revenue.

Well, it wasn’t long before our team discovered our first of many roadblocks.

After planning a product roadmap on Friday night, our team spent a large proportion of Saturday morning interviewing bypasses at local markets and clothing stores. To validate the need for our product, we first had to gather data about our target users.

After returning to RCL, we started developing our product platform. We also began hunting down affiliate links from existing conscious clothing brands.

We applied for just about every affiliate program available, and even spent hours reaching out to local Instagram pages.

This is where we encounter our first major roadblock – it was a Saturday.

Being a minor setback, we regrouped as a team to revise our product strategy.

We decided to still drive traffic to affiliate stores, but instead of tracking a sales commission, we would identify what the average conversion rate would be from the users we had referred.

From this conversion rate, we’d understand what revenue we could have made, had we already been partnered with the affiliate stores.

So we moved forward and continued to build our online marketplace.

It was only after sourcing our final referral products and completing the store build that we encountered our next roadblock.

When we were ready to create our Google shopping ads, I soon found that the available Google credits were only valid for Googles Cloud Platform (GCP), not Google Ads. We were told the wrong information.

It was 9pm on Saturday night and my team had a product we weren’t satisfied with.

We had little resources to promote it, and by no means a way of generating revenue.

We were ready to give up.

But we were determined.

Thankfully, my good friend Lachlan Young was working in RCL over the weekend.

I explained our predicament and wasn’t afraid to ask for advice.

He consulted our team and guided us to a new strategy. One that would help us generate real revenue within the next 12 hours.

At this point in time, the only valuable asset we had was the user data we’d collected earlier on in the day.

Our strategy completely pivoted to serve these users. After all, these were people who had told us they were willing to become customers of our platform.

In fact, my biggest regret was that we didn’t collect their money when they’d told us they were interested in person.

Instead of developing a marketplace, we built a curated email with a list of conscious clothing products these users could purchase.

At the bottom of the email, we gave users an option to sign-up for early access to our ‘personalised conscious clothing platform’ as soon as it was released.

I designed a product dashboard in Canva to make our platform more tangible.

Our goal was to sell users the dream, but also be transparent that it was just a proof of concept.

Users could pay $5 to join our pre-beta program.

We also agreed that 50% of all registrations would be donated to ABC and Rice, a charity supporting social causes.

This would give users peace of mind knowing their money went towards a good cause, even if our platform didn’t scale.

It was Sunday morning when we published this email.

You can catch our pitch from 23:26 in the video below.

By the end of the weekend, it was announced that we’d placed second.

In placing second, our team was also offered three positions in the Startup Onramp program.

So after participating in my first Startup Weekend, here were my main three takeaways.

I’m looking forward to scaling our Cloval with our team.

I’m a twenty-three year old Digital Marketing & Conversions Specialist based in Brisbane, Australia. With a passion for all things digital and tech, I aim to connect and learn from as many like-minded digital enthusiasts as possible. If you have a passion for emerging technologies and digital practices, I’d love to connect and hear your story.